This page is just for you.  I will share examples of how other kindergarten teachers in the district have adapted routines for their young learners.  You can begin creating a Culture of Thinking in your classroom  by routinely asking "What makes you say that?"   These words will cue your students that their thinking is valued and expected.   By identifying responses as thinking, your students will begin to understand what thinking is and the power that it has.

It is important for you to know that many Visible Thinking routines are adaptable to the development and skills of your students.  That means you will may be taking dictation or doing routines and recording responses in a whole -group setting.  Or, you may just use parts of routines to build up to a fuller expression of thinking.

As you try routines in your classrooms, please take photos and email them to me!  We all need to support each other.  Here are some ideas to start you out:

Take a walk with me down the kindergarten hallway and into a classroom and you will be amazed at the type of thinking happening there this spring.

Who Says Visible Thinking Routines Are Not for Kindergarten?

Beginning the Year in Kindergarten

This is how kindergarten teachers have started the the 2013-14 school year with thinking!  If you would like to talk about strategies to use in your classroom, send me an email.  You can use the form on the first page of this website.

A Year of Visible Thinking in Kindergarten

Studying fairy tales seems to be a staple of kindergarten learning.  Traditionally, students study and recognize story elements of fairy tales, compare and contrast different fairy tale versions, recognize common themes and elements of various stories or compare different versions of the same fairy tale.  Substituting Visible Thinking routines for these activities definitely raises thinking to a new level and puts a new spin on story understanding.  Here are three ideas that fit right in with the Fairy Tale Study:

Step Inside:  Ask students to "step inside" the character's shoes.
Thinking about what we know about the story and the Pigs in the story of The Three Little Pigs:
What is the pig thinking?
What is the pig feeling?
What will the pigs do next? 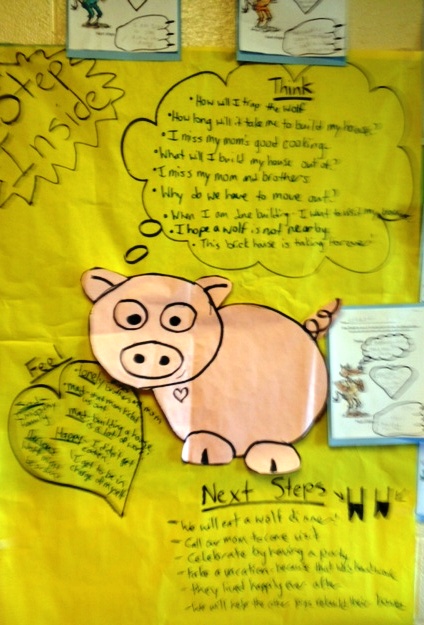 Headlines:  Teachers scaffold student understanding of Headlines  by generating ideas of their own that would represent the heart of the fairy tale.  They then present them to the students.  The students, in turn, choose the headline they like best and illustrate it.

Tug of War:  Pose a dilemma from the story and have a Tug of War:
Should Goldilocks have gone into the house of the 3 Bears? 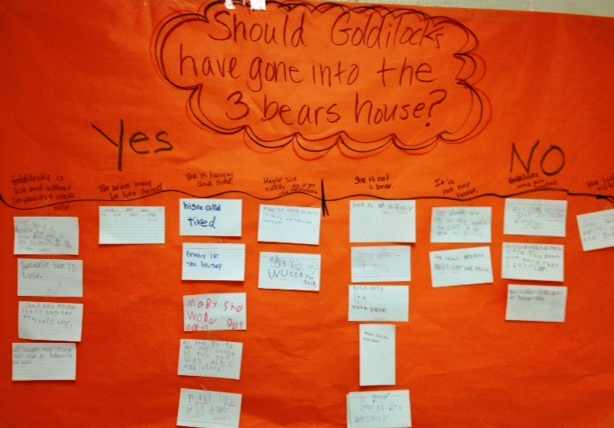 Tug of War is described on the Routines page.  This is the kindergarten version...

A question of high interest is posed to Kindergarten students:

Should Bemis Kids Be Allowed to Bring a Sweet Treat for Their Birthday?

Students meet in small groups to discuss the pros and cons of this question then agree on a response for each side of the argument.  The teacher writes the responses and puts them on the Tug of War rope.  Gaining the perspective of both sides of a question helps everyone incorporate new ideas into their thinking and understand all points of view!

Students remained actively engaged and responsive throughout the lesson and at the end had built an understanding of the many different details of a story setting.  After the Zoom-In lesson, students got their book boxes and were encouraged to pay close attention to the details of the story settings in their books.

Analyzing different versions of the Gingerbread Man has taken a new twist in some kindergarten classrooms this year.  Students were asked to Step Inside this story book figure and speculate what he sees, feels, thinks and hears.

The Gingerbread Man was also the subject of a Claim-Evidence-Reasoning lesson.  Take a look at the question, hypotheses, investigation and conclusion from this learning activity.

I have seen the results of this routine at both Bemis and Wass.  In each case, the teachers were happily surprised by the thinking shown by their students and motivated to continue using this routine as an instructional strategy.  At Bemis, students were asked to See-Think-Wonder about fall.  Their thoughts were posted in the kindergarten hallway on a giant banner.  As learning and understanding grew about fall, new student thinking was recorded on sticky notes and added to the banner. 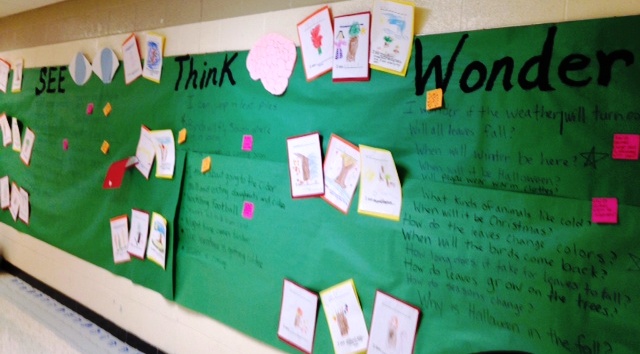 See-Think-Wonder was used at Wass to launch the Wood science unit.  Wass Kindergarten teachers will also continue to add thinking to their poster as learning progresses 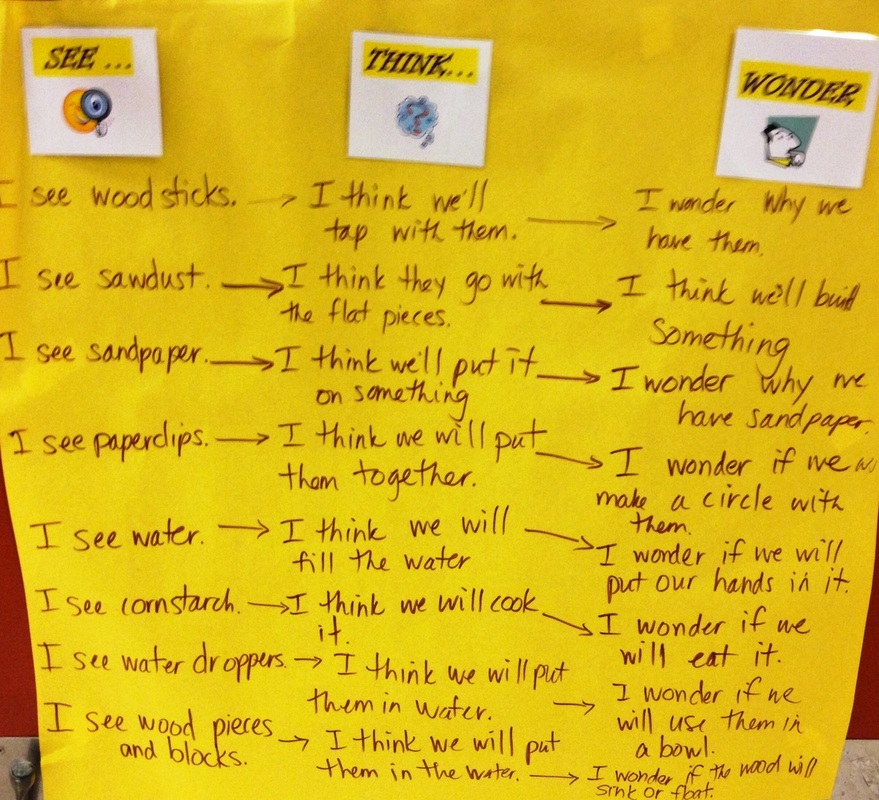 Developing Thinking for the Color-Symbol-Image Routine

Kindergarten teachers understand the cognitive developmental level of their students and know that kindergarten thinking is so concrete and "right there" that it would not make sense to delve into the metaphorical thinking required for a full-blown C-S-I!  It does make sense, however, to expand kindergarten conversations about color to include ideas of how colors might remind someone of different things.  Your young students will likely persist in being literal about color:  "I feel blue today because I'm tired and my sheets are blue."  But as you continue to model with more metaphorical examples, some will pick this up:  "I'm feeling blue today because our tears are blue and it makes me think of a sad color - a crying color.  Someone fake kicked me."  Students can always draw a picture (image) to go with their words.

In Kindergarten, Chalk Talks are likely to be done whole group with the teacher recording responses to the prompt.  As you are preparing your students to become engaged readers, a prompt you might consider is:  "What do readers do?"  The Bemis Kindergarten teachers did this and are planning to build their CAFE boards using the terms and language from the Chalk Talk.  For example, "Readers think about the words and pictures" might be the descriptor for the "Comprehension" column on the CAFE board. 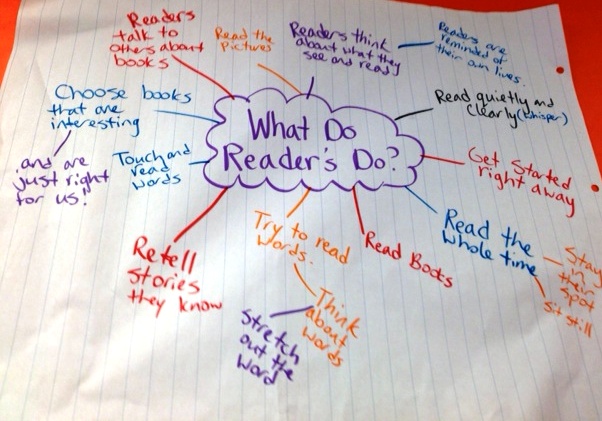 Using Routines To Launch a Unit

Below is a picture of the a chart created by a kindergarten teacher as the class discussed allergies.  You can see that this teacher used the Think-Puzzle-Explore routine to frame the discussion.  Read the recorded responses carefully.  Having taught kindergarten for 8 years, I was quite amazed at the thoughtfulness and depth of the the responses! 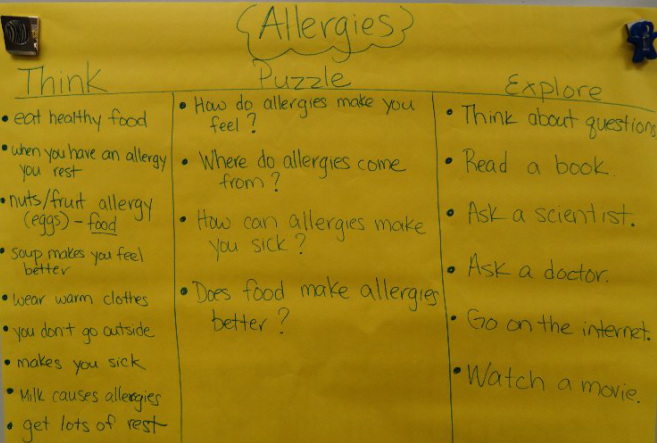 There is much discussion in the district about using the Claim-Evidence-Reasoning (CER) framework to increase rigor in our science curriculum.  CER is not one of Ron Ritchhart's  Visible Thinking routines but it can be used in a routine manner and it can infuse thinking and understanding into the learning.  CER begins with a science question, then predictions are made about the answer to the question, then there is an investigation.  When the investigation is completed; a claim is made about the answer to the questions, evidence from the investigation is used to support the claim and finally scientific principles are used to explain the evidence.

Below is a picture of the Chalk Talk as it was recorded by a kindergarten teacher that captured predictions about goldfish behavior at the beginning of the "Two-By-Two" science unit.  As the students do goldfish investigations, they will be referring to their predictions as they make their claims and identify the evidence to support their claims. 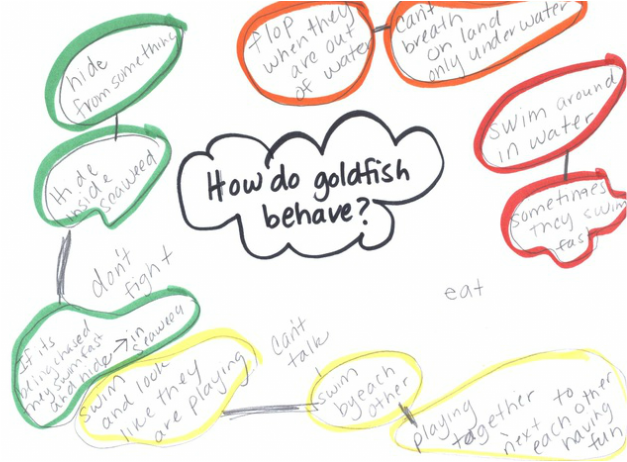